Â« Here It seemed interesting and useful to give some brief definitions of the most commonly used techniques and general terms most often used in the vast universe of printmaking. I for my part, during my long experience in this field and at different times, had the opportunity to learn and use most of these techniques. The woodcut is today and for many years, my almost exclusive means of expression. Â» 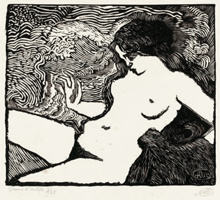 Woodcut or Xylography
The technique of woodblock or woodcut is used in the West continuously since the fifteenth century. The woodcut is part of the printing techniques known as in relief. The artist performs a preparatory drawing on wood. He digs around the negative shapes with a knife, chisel, chisel or gouge. All that is engraved appears as white on the paper with the inking roller touching only the raised portions. Once the cutting is completed, the initial pattern appears in relief on the woodâs surface (the saved area). The most used technique is cutting with the direction of the wood grain. This technique has always been popular with artists for its expressiveness. 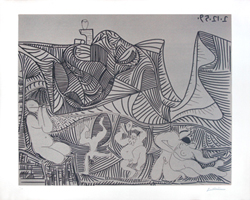 Linocut
Appeared around 1900, linocut is close to the woodcut technique. The artist performs a preparatory drawing on a linoleum plate. He digs out the white reserved area in its composition (as compared to etching in "relief printing"). The inking roller will touch only the raised portions. The colored areas then are homogeneous. The tools used for engraving on wood are also ideal for linocuts and gouges are the basic tools. The technique has the advantage of easy manipulation and flexibility. The edition size is often limited because it is a soft support (linoleum - flooring - is a powdered cork based agglomerate). 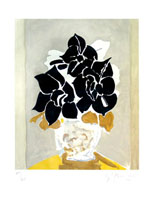 Lithography
Lithography is a printing technique invented by the German Alois Senefelder in 1796. This method exploits the incompatibility between water and grease on a flat surface of a limestone. This support allows drawing directly on the stone, so that the work can be very flexible. The artist creates his design on the stone using crayons and/or lithographic inks. A chemical preparation made of nitric acid and gum arabic then fixes the drawing on stone. The stone is moisened and finally an inked roller is passed over the surface. The ink only adhere to the drawn areas. For reasons of convenience, a plate of zinc or aluminum may replace the stone.

Etching
Etching is a technique widely used in the art of intaglio printing. After covering the metal plate with a varnish, the artist realizes his drawing using a needle, thereby exposing the metal where it has been incised. Once the drawing is completed, the plate is then subjected to the corrosive action of the acid, which will dig into the exposed parts (intaglio). The varnish is then removed with a solvent and the plate is inked. The excess pigment is carefully wiped away. The plate is covered by a sheet of moistened paper and covered with felts. Firm pressure from the rollers of the press on the sheet allow for the transfer of ink to paper.

Aquatint
This is a technique derived from etching which provides the plate surface  with a tonal effect made up of small dots. The result is obtained with a more or less fine resin powder sprinkled onto the plate, then heated to melt it, which hardens when cooled and adheres strongly to metal. This will result in a sort of dot texture that resists the action of the acid. As with etched lines, aquatint tones become darker the longer the plate is left in the acid, but just to the point where the effect is lost from too much expoure to the acid. This technique can create a delicate wash effects typical of watercolor.

Engraving
The artist works directly into the metal using a sharp steel burin, pushing it with the palm of his/her hand or rotating the plate on a cushion or a wooden board. The plate is ideally copper because of its consistancy, but zinc or steel can be used with difficulty. The cutting into the metal creates a burr that must be removed. Ink is pushed into the incised lines and wiped clean as in the other intaglio processes, but before the inking process, it is necessary to soak the paper, so that it is moist and flexible enough to penetrate into the finer lines. The plate, once inked, is passed through the press, protected by felts as with other intaglio methods.

Drypoint
One of the earliest and simplest forms of intaglio, Drypoint is akin to drawing, but done directly onto the metal plate with a sharp needle. The resulting line is shallower and more delicate than engraving. The furrow made from drawing the needle creates a delicate burr depending how the tool is handled. This burr will catch ink and allow an expressive velvety quality to the print as long as it is not worn down from excessive printing.   Because of this fragility, a print quality and quantity will be limited. Often used uniquely on the plate, this technique can also be incorporated with etching and / or aquatint. Itâs easy use and the distinct quality of line, have  attracted many artists of the twentieth century.

Serigraphy
The matrix consists of a stretched fabric screen with a mesh that allows the passage of ink on portions corresponding to the image. Areas that are blocked out will not print. The ink is pushed through the mesh using a squeegee. The pressure applied with the squeegee and the elasticity of the fabric allow the ink transfer to the paper fixed on the printing table. Stencil techniques are used to transfer and build up the various colors in the composition. With a thick build up of colors, a more ridge support like  cardboard would be better than paper, but other surfaces like textiles, metal, glass and wood can also be used.

Viscosity Printing
This intaglio technique is based on the principle that a wet or oily inks will repel inks that are less so; these inks are applied onto a relief etched plate with either a hard or soft roller which will touch the plate depending on the rollerâs hardness or softness. First an intaglio color is applied and wiped. Then a wet color is applied with hard roller that only touches high relief areas of the plate, followed by a less wet color, which is repelled by the first roller color, but touches lower areas of the plate because of the softness of the second roller.

Color Reduction Printing
Color reduction printing is a gradual process of removing already printed areas of color; these zones will remain in their desired color and keep their intensity. The transition from warm colors to cool colors is made by printing multiple layers of opaque white ink (considered as a blockout). The entire edition is printed after each change of color nuance and when the process comes to an end, the printing surface has virtually disappeared to the point of becoming totally unusable. 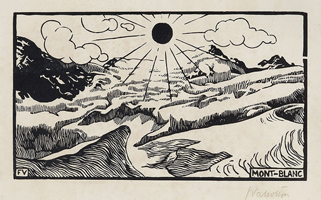 Relief Printing
The word Â« print Â» means the art of creating an image by digging the surface of a matrix. When at plate is etched in deep relief, there are several different areas to deposite different colors. Using rollers of different hardness and the technique of ink viscosity and intaglio inking, the interplay of three different colors will result. Or a deeply etched plate can also be used for an embossment effect; inked or without ink. Wood is the preferred medium of relief printing, but also the linocut can be ued with less subtile results.

Soft Ground Technique
This is a type of varnish used in etching. It usually partially consists of tallow or vaseline that allows textures to be pressed into the ground or easily drawing through with a blunt stylus directly or through paper. A degreased metal plate is covered with the soft varnish by a roller, then slightly heated. Once impressions have been pressed into the ground or drawn on, the plate is then placed carefully in an acid bath. The advantage of this technique is that it can create unique textural effects or a different quality of etched line unattainable by another processes.

Matrix
The matrix is ??the medium on which the print is made. The support for a technique, sometimes will affect the final result. It could be a plate of copper, zinc, aluminum or steel or even sometimes a plexiglass plate used for the desired technique. Lithography, the planeographic printing process, will use a non-porous limestone support; the grain of the stone must be perfectly homogeneous with no defects and quarry supplied stones of sufficient quality for lithography are rare. Lithographic matrices generally have a thickness of 7 to 10 centimeters and the two faces must be perfectly parallel. Woodcut is perhaps the oldest printing technique. The choice of the wood and direction of the grain are essential for obtaining the desired results. 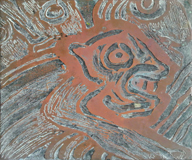 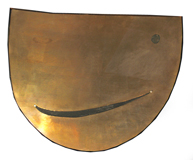 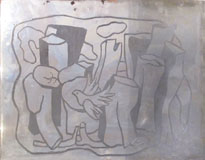 Trial and Artist's Proofs and the Edition
The number of trial proofs of an edition will vary. These are prints made to find a desired effect, such as color or intensity before beginning to print a consistant edition. It is important to refer to the artist's catalog raisonnÃ© when one exists; it will indicate comprehensively the entire run of a printed image. The numbering of proofs will be specified there in Arabic numerals and / or in Roman numerals. The number of artist proofs (E.A. in French or A.P. in English) or possibly Hors Commerce (H. C.), which are not designated to be sold. The artist's proofs are for the exclusive use of the artist. Trial proofs sometimes will add to the status and collectability of an image, because of their rarity or as examples of how the edition was developed. Most often, the numbering of the edition or its Â« quality Â» is shown in pencil along with the signature of the artist. This is most often done by the artist, but when not possible, it is done by the publisher or printer.