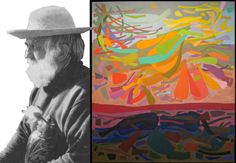 Jim Monson was born in Minneapolis, Minnesota in 1943.

He received his BA diploma from St. Olaf College, where he took painting courses from John Maakestad.
Â« John Maakestad was my first mentor and friend, who encouraged me to explore and express myself with my art. Â»

Then in 1965 he continued his studies at the University of Iowa, where he continued painting under Byron Burford, but began to major in printmaking under the direction of Mauricio Lasansky, often considered one of the outstanding American print teachers of the 20th century.
Â« Lasansky opened-up a whole new world of prints and a passion for the medium. Â» 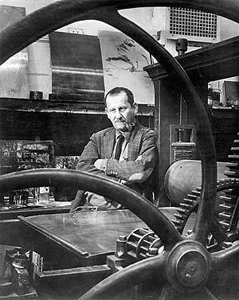 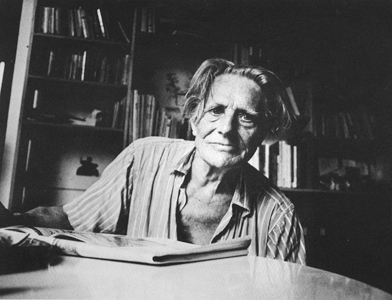 Diplomas in hand (1969), he decided to go to Paris and continue his work with Stanley William Hayter at the well-known Atelier 17.

Â« Paris formed me and gave me my first concept of a professional life, my myths, essential subjects, my sensitivities and in brief, my pictorial philosophy. Founded n 1927, Atelier 17 became an international focal point for print innovation.  Hayterâs introductory approach to prints was a complete departure from what I had learned from Lasansky. This was a new strong emphasis on abstract composition and working the metal plate in relief for a new direction in color printing. Â»


He became an assistant at the atelier and printer for Hayterâs work from 1970 to 1973; there was a profusion of artists and activities and a constant exchange and sharing of ideas. Here he met the German artist Isolde Baumgart, who would become his wife and her close friends Roger Platiel, Hector Saunier, Gail Singer, the Korean artist K.B. Hwang and many others.
Hayter once wrote:
Â« Monsonâs prints offer a realm of unknown experiences. His world, expressed through the abstract, is obviously a world of imagination, fed more by the experiences of life in general than a specific subject or object. His work is without any presumption and corresponds more to a resonance in oneâs imagination. Â» 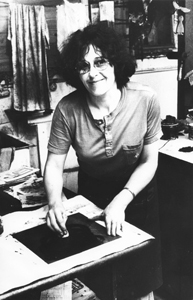 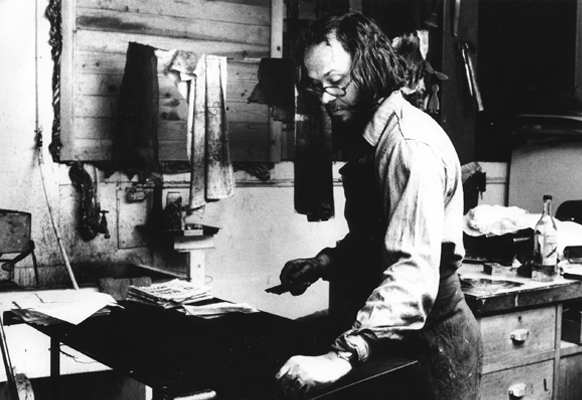 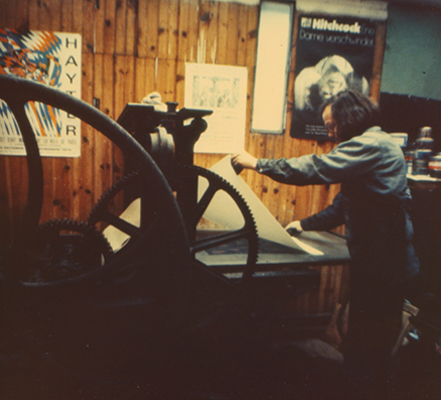 After his first year in Paris, Jim Monson rented a house with studio and equipped with a Le Deuil press that was not far from Atelier 17, where he continued his work. Here he printed his own editions as well as for other artists (Georges Hugnet, Matthew Spender, Yasuyuki Kihara, JoÃ«lle Serve and George Ball).

In the Fall of 1973, Jim Monson accepted a position replacing Warrington Colescott at the University of Wisconsin in Madison. Among his memorable students were Bret Wilson, Susan Gosin and Joann Moser, who wrote her doctoral thesis on the global influence of Hayter and Atelier 17. A few years later she was to become the head curator for prints at the Museum of American Art in Washington D.C.
Â« While at the university I made several photo-etchings, combining drawn images with a relief intaglio plate. Â» 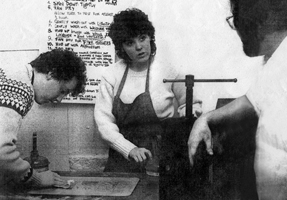 Jim Monson began a print workshop in the south of France near Tourrette-Levens, where he would invite friends from Atelier 17 to spend the summers. He was also invited as artist in residence at the Tyler School of Art in Rome. In 1976 he was appointed to a joint professorship at Carleton College and St. Olaf College (Northfield, MN). From 1977 to 1982 he was an assistant professor of prints and drawings at the College of the Holy Cross in Worcester, Massachusetts and in 1981 he participated in a print symposium with Garo Antreasian at  the University of Massachusetts in Amherst.
Â« Here at Holy Cross and Amherst, I made several lithographs and later developed a department of lithography at the college. It was also at this time that I began looking for a simpler approach to printing as in xylography. Â»

In 1984 his wife Isolde Baumgart accepted a teaching position at the Merz Academy in Stuttgart. The couple spends much of their time between Frankfurt, Stuttgart and the South of France.

In 1985 he returned to settle definitively in Tourrette-Levens, near Nice. Although etchings and engravings dominate his early work, Monson is now known more for his color woodcuts, which has been his passion for more than thirty years.

What could be more simplistic than working by the principle that what is cut away from the surface matrix no longer effects the printed image. But eliminating complexity of technique still demands a laborious procedure; a trade-off that he considered worthwhile since none of the subtleties in cutting are lost in the process and the resulting colors are much more vibrant since a red is composed of a gradual build-up of the preceding yellows and oranges. He stumbled onto this manner of printing by observing Picassoâs simplistic approach to creating his linoleum prints. This was a progressive cutting away of a single matrix for each color. Initially Monson used two wood blocks; the first represented an independent background and the second block was used to develop the objects, which also creates a spatial reality. Using one or two blocks was still a more economical method of printing than the traditional method of using one block for each color. The development of the composition, working from a predetermined color solution, is produced by the progressive elimination of areas on the matrix once their desired effect has been achieved. This means that the quantity of the edition must also be predetermined and that each nuance of color must be printed on the entire edition before the matrix is modified and progressively destroyed.
Â« Variations on this approach to printing still fascinate me. Â» 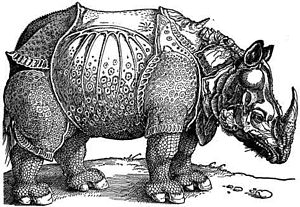 The artist lives and works even today on Tourrette-Levens, surrounded with his collection of prints, cactus and . . . rhinoceros (a passion!).

Pictures of the posters : * 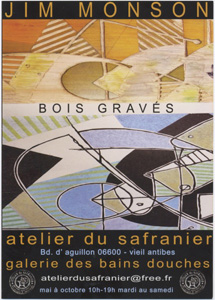 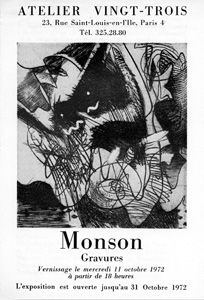 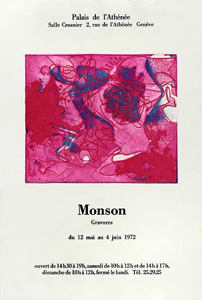 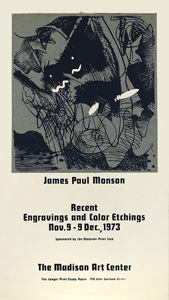 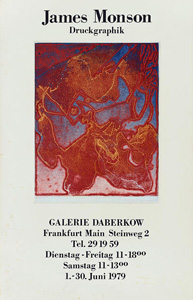 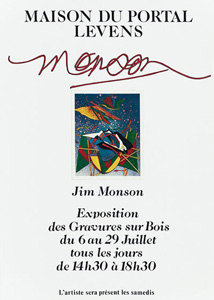 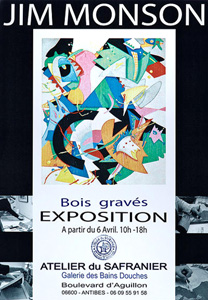